Catherine has light beige hair that she wears in a ponytail, she has blue eyes. She wears casual-smart clothes, she first appeared in a light beige suit shirt and greyish-blue jeans. She has a small dark mole under her left eye.

Similar to Shizuku Hazuki, Catherine is a very teasing person, and leading them on for her own enjoyment. From Christina's descriptions, she is very forward, showing no shame when it comes to kissing family members or people she just met, which took Kou by surprise.

Contrary to her less serious side, she possesses great management skills, having worked with a development team of over one hundred members in the past, though that experience had left her tired and made her choose a smaller team.

She believes that people should speak at the right time, but when that does not happen, she even encourages people to be more assertive when they want to get something across to her. Catherine has a lot of faith in her employees, but is willing to be proactive.

Catherine is first mentioned by her sister, according to Christina she took her kiss greetings too far, even calling her an "aggressive kisser" in her head. That closeness had contributed to Christina not wanting others to get physically close to her. She also says that Towa made games in France.

The second time she was mentioned was when Christina confirmed she accepted working with Kou in France.

When Kou finally sets foot in France, she is approached by a mysterious woman, who asks her if she is cold, in French. Kou, thinking she is a stranger, tells her 'no' in Japanese and walks away, but she continues to follow her. She then calls her by her surname, still speaking in French.

The woman introduces herself as Catherine Towa Yamato, and asks if she is Kou Yagami. Kou confirms this and introduces herself, but does this in Japanese. And Catherine decides to tease her by pretending not to know Japanese. Kou tries again, speaking in French and Catherine continues to lead her on, before saying she could speak Japanese already and just wanted to tease her a bit. After, she takes Kou on a tour through France, sees the buildings for her company and dedicated school, before visiting Kou's new home.

Towa meets Rin, she tells them what a "bisou" is, and shows her and Kou with Sophie.

Hotaru is welcomed to the Blue Rose concept art team, she has decided that Hotaru will be having the job of designing the most important monster and the face of their game, the King's Hand. One of the employees disagrees with her decision as she hardly has professional experience, but Catherine says she draws better than everyone else there. Hotaru only draws what she wants and does not have the same style of work as they do, but if not for that weakness, everyone would want her and she would not be working for them, she has already talked it over with Hotaru,

Another employee asks how she will overcome that weakness as the problem remains unsolved, and Catherine does not know how to solve it, but she is starting by hoping for one success. If she can succeed once, then the rest will okay since the development is mostly complete now.

Kou thinks that giving her the role upon joining is unreasonable, but gets cut off by Catherine because she did not bring it up during the meeting, missing her chance. She is about to back away, but gets encouraged to be more assertive instead of saying of silent. Her opinion is that Hotaru might give up and leave, but Catherine simply concludes that that means it just was not the job for her, and Kou will draw the design within two days. She believes Catherine should not treat people like tools, Catherine does not think of them as such, however it is right that she make the best game possible and contribute to sales. She is not trying to make satisfy people's self-esteem or advance careers.

The next day, she threatens to lecture Kou and Hotaru after catching them talking about King's Hand outside of work.

Catherine reviews Kou's design, but the two find out that even the employees that were not given the job are "secretly" drawing and submitting their own ideas, such as Mira. She looks at Mira's design and says that that the skull image was not the vision she had in mind, a rejection.

Catherine looks on happily at the works in progress from Kou and Hotaru, commenting that their works are coming together. She declines to comment on which is better until they are both done, though. After, she has a talk with Kou, and proposes for her to leave Eagle Jump and formally join Blue Rose, as Kou has done amazing work in the past year and could become a main designer without much time. If there are any conditions for doing it, then Catherine offers to listen, and awaits for an answer within a month.

Kou declines, and decides to return home, and Catherine reveals that Christina had been asking for her back multiple times, and herself wanting to keep her there was just her own prejudice, giving her a flight back to Japan for tomorrow. Kou is surprised by this since she has not completed King's Hand, and Catherine says that is why she got one month, she knows Hotaru can finish thanks to Kou's instructions.

Looking to her, Catherine thinks that Kou believes her only skill is in her art, but she personally thinks that Kou has a natural skill for supervising people; since she came to Blue Rose, the office has been filled with energy and Hotaru is overcoming her own weakness, she is loved by everyone. And Catherine hopes that she can use this skill well in Japan.

She, along with Sophie and Hotaru, see Kou off.

When she leaves, Catherine asks Hotaru if she wants to become a pro. Hotaru says that she is starting to realise what is fun about being a pro, she feels frustrated that she lost to Kou, but she cannot give up yet. Catherine says she never thought she would here those words from Hotaru, and thinks that she should have not let Kou go after all. Hotaru simply states that she could have just kept this all quiet and left her as a loan employee, and Catherine laughs, calling her clever, though Hotaru sees through the act.

Catherine is quite flirtatious towards Kou, taking enjoyment in embarrassing and teasing her, usually with with kisses, something very common in France. Luckily, Kou has gotten a bit more used to it.

They are quite friendly with each other, and Catherine is willing to listen to whatever concerns she has, she even is willing to make any arrangements if it meant Ko working for her. She values her work and contributions to the concept art team greatly, and has picked up on her talent for watching over others.

Hotaru works under Catherine at Blue Rose. She has a lot of faith in Hotaru's ability despite being aware of her weakness.

She is rather gung-ho towards her employee's tasks, never telling Hotaru to do anything in particular, letting her do whatever she needs to do, if it means getting what Catherine wants done.

Catherine is also quite joking towards her, not teasing her as much, as she does Kou. Hotaru is rather comfortable around her, being able to give her won thoughts on Catherine's decision to let Kou go.

Towa, with Kou and Hotaru, in Chapter 92. 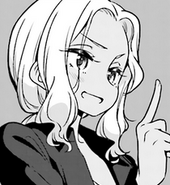 Towa hopes for one success from Hotaru. 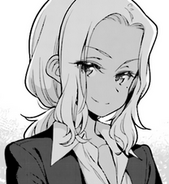 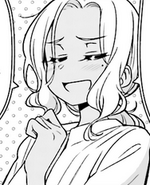 Towa is proud for uniting Kou and Hotaru. 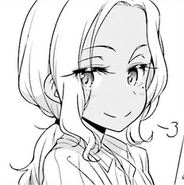 Towa pretends to not understand Japanese.
Community content is available under CC-BY-SA unless otherwise noted.
Advertisement