Eagle Jump is the video game company where Aoba Suzukaze and her colleagues work. It is the company that created the popular Fairies Story franchise. Their games are funded and published by Houbundo.

Eagle Jump Co., Ltd is located in Tokyo. The company building has a security feature where you cannot enter the office without scanning an employee ID. However, it is not required to scan the ID to leave the office. This was seen in Episode 1, where Aoba leaves the office for a toilet break, but is unable to return due to the absence of her employee ID. According to Ko, the employee IDs are also used to clock their working hours. The regular working hours are from 10:00 to 19:00 (8 working hours + 1 hour break),[1] though Aoba is often seen working overtime. The building also has its own cafeteria for the employees' lunch breaks.

Most of the characters seen in New Game! are women, but it is mentioned that male employees also work there. Eagle Jump is not a large company, so they don't recruit often. It appears that the company recruits all year round; Aoba began working while Fairies Story 3 was still in development. It is unknown what their recruiting standards are, but it seems that they support on-the-job training, as Aoba had little to no knowledge of 3D modelling during her first days of employment but learned it while working.

Employees are paid a salary every month, though the exact amount is unknown. Part-time employees are paid on an hourly wage. Evaluations happen annually, giving employees a chance to receive a raise or even a promotion. It is implied that the employees are paid lower than average, as part-time workers can earn more if they work overtime and over the weekends. In addition to regular employees often working overtime and on weekends, this led to some fans speculating that Eagle Jump may be a black company. Despite that, the promotion system and paid leave system seems to work, and few workers, if any, complained of their work environment.

Eagle Jump also has a custom where they sponsor company trips for their employees after releasing a product. Locations range from a ski resorts[2] to hot springs[3].

During the development of the first Fairies Story, there was low expectations of success and almost no development budget was allocated.[4] Little gameplay of the Fairies Story series is shown, but it is likely a JRPG. Kou was assigned as the lead character designer after winning the art contest. To their surprise, Fairies Story was a success, and Kou became the 'face of the game'.

Kou was eventually promoted to an art director for its sequel. However, poor cooperation among her peers led to a new employee quitting, and she stepped down due to depression. Regardless, Fairies Story 2 was still a massive success.

During the development of Fairies Story 3, Aoba learned of Kou's past, and managed to persuade her to become the art director for their next title. Rin was also promoted to assistant producer. Hajime joined the planning group, in addition to doing animations.

After the release of Fairies Story 3, a decision was made that Eagle Jump's next work will be an original title. The game is an action game with a stage clear system[5] and includes stealth elements where the main character will

gain the abilities of enemy characters they defeat. A competition was held for the character designs. Aoba won the competition with her design based from her full body teddy bear sleeping bag, which also influenced the overall design and story direction, and was made character designer. Ko became art director, as she was most senior artist and also had helped Aoba with her follow up character designs. After the initial prototype of PECO was completed, Hifumi became the character team leader. When it came time to promote the game, the publisher decided to push PECO as the next game from Fairies Story team Hazuki and Yagami, and Ko was given the key visual assignment over Aoba.

After PECO has been released, Hajime proposed multiple ideas for a new game, but they were all rejected. In an effort to convince the higher-ups, she worked with her team to create a test version without the company's approval. Their attempt was later discovered by Rin and Umiko.

Later, her game idea is put through, a 3x3 dodgeball battler aimed primarily at young boys. During the art content, Aoba gives only a basic rendition of the concept ask, while Yun gives her unique idea of what the characters could be and Momiji goes beyond in an attempt to actually affect the gameplay. Momiji's idea is judged to be beyond what the budget would allow for, so Yun's shonen idea is ultimately chosen.

The head of the entire company.

Producers work directly under the company's publisher. As such, they have higher authority than the director.

The director oversees the development team, schedules, reports progress, hires and assigns staff, and so on. The director may change depending on the game being developed.[6]

The design team is responsible for the making the gameplay, such as the rules and structure of it. This can include the User Interface, documentation, narration, and content.

The graphic team creates the visual elements of a game, such as characters, scenery, objects, vehicles, surface textures and clothing. The team is lead by the art director, who will set the basis for the art style that the rest of the team will follow. The graphic team is further divided into sub-teams, lead by their respective leaders.

A team that specifically handles character designs and modelling.

A team that animates models and other objects in the game.

The programming team designs and writes the code that runs and controls the game. 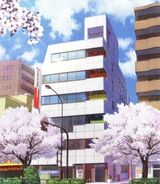 Full exterior view of the building.

The main exterior view of the building from Episode 3.

Various concept sketches for the exterior shots of the building.

Organizational chart at the beginning of PECO development

Organisational chart of Eagle Jump, as of Desctruction Dodgeball.

Community content is available under CC-BY-SA unless otherwise noted.
Advertisement