Hajime has the most tomboy appearance with short brown hair, green eyes and a quite large bust.

She wears a blue hoodie on top of a yellow tank-top with black shorts and blue shoes.

Other than Hajime's appearance, she acts like a tomboy who is rather athletic where she often riding her bike to work and being rather sweaty when she enters work. It is also shown in how she waves her sword-like items to visualize the motions she wants. She is also loud and friendly, greeting her co-workers in the morning with "Hey people!! 'Sup!".

Hajime is also a massive otaku, buying toys, models and figures, she also likes watching anime especially those who have heroes. She is fond of the detective series 'Dandy'.

Due to her fanboying over anime and television, Hajime has poor spending habits and is constantly on the borderline of being broke due to buying too many toys and figurines.

She is also a collector to the point that if she wants something, she will have no qualms about buying it. She usually brings her new items to work and displays them on her desk, but because of her clumsiness people can be hurt by them, like Yun Iijima.

Hajime's first interaction with Aoba Suzukaze was when Kou Yagami asked Hajime about borrowing the latter's lightsaber to use as lighting. Hajime introduced herself and was flustered when Aoba called her Senpai. The two had their impromptu break together with Yun Iijima and Hifumi Takimoto and they talked about their first experience and a rumor which Hifumi confirmed as truth. Then, when Hajime talked about Kou, the latter appeared and gave her a bump on the head.

Days later, Hajime attended the Welcome Party for Aoba. She laughed and made aside remark when Kou and Rin taught Aoba how to properly pour an alcohol. After the Welcome Party, Hajime escorted a very drunk Yun home.

When Hajime and Yun talked the animation of Aoba's work, the two noticed Aoba looking at them and Hajime watched as Yun started teasing Aoba. Aoba asked Hajime if she can see the animation and started praising the latter. Kou walked in and asked the two to buy a tablet pen for Rin.

While the two was picking what tablet pen to buy, Hajime started lecturing Aoba how to deal with errands and when they're about to pay for the tablet pen they picked, the two found out that Aoba left her wallet at Eagle Jump while Hajime must've dropped hers. Afterward, while Hajime was with the customer service, she has her internal monologue about Aoba. Minutes later, Aoba walked in and presented Hajime the latter's wallet and told Hajime that she found it on her desk. While walking back, Hajime told Aoba she was cute which the latter said the same for her and Hajime started acting cute. After returning, Hajime and Aoba were greeted by a surprised Kou. Yun butted in laughing at Hajime's force cuteness and the latter ran away.

Days later, Hajime asked Kou if the latter can really scold the three latecomers which Kou said she can.

Bonus (On their Days Off?) - Aoba asked Hifumi, Hajime, and Yun what they do on their days off. Yun answered that it's a secret and Hajime asked her the reason why that's so. Yun then tells Hajime the reason is also a secret. (Hajime's Days Off.) - Hajime came to watch a hero stage performance and said it was great.

When they got their first paycheck, Hajime taught Aoba how to get a raise which Yun interrupted saying that Hajime only uses her money for toys. Hajime asked what's wrong about that, said that they even used it for reference and begun showing off her lightsaber and sword. When Rin and Aoba talked about evaluation, Hajime said that the character team it rough under Kou's supervision making Aoba asked what she's doing in character team booth. Hajime and Rin explained the former situation to Aoba.

One lunchtime, Hajime asked Aoba what she'll do and Aoba answered that she won't take the break. Hajime called out when Yun asked Aoba t repay her double the thing she just gives.

Hajime and Yun told Aoba about their first time designing a character when the latter got the job. The two asked what kind of character Aoba was tasked to do and thought that it's Aoba for the same personality. Afterward, while Kou, Rin, and Aoba were talking, Hajime interjected, saying she loves animating Aoba's work and changed the subject to what she'll going to do when she becomes a boss, making Kou and Yun say they'll quit

Hajime, Yun and Aoba tried reenacting what's happening on a meeting by giving each other their status report. They also asked Hifumi for hers who told worriedly told them that the remaining number of character and days didn't match up.

While watching Moon Rangers Movie, Hajime sneezed which she didn't know why.

Hajime meets Aoba Suzukaze outside of work where she advises Aoba on exercise. Because of Hajime only wearing a tank top, the temperature is almost too low for her tastes. Later, she goes and turns up the thermostat, thinking it is fine because Kou Yagami used to do it last year. Kou goes to turn it down, Hajime notices that the temperature is even lower, and she finds out it has been turned down by six degrees, she takes it as a challenge and turns it up by eight degrees.

When Kou devises her plan to catch the perso messing with the thermostat, she catches Yun instead, and Hajime then admits to being the one who turns it up, resulting in a narguemtn between the three of them. Luckily, Rin solves it by banning all of them fro using it.

Hajime overhears Aoba Suzukaze and Yun Iijima talking about the brand of bras, and she blushes in because she not good at those kind of conversations, she comments that the robes are quite thin. She calls the two lucky, to their confusion.

Aoba ends up getting a rather anxious nurse to draw her blood, Hajime and Yun watch her unsure performance, before praying to get the older nurse. But unluckily for them, she steps out to let her take care of things.

Next their wastes are checked and the nurse there comments that she has quite a slender waist, asking her if she exercises a lot, Hajime simply says she does not do it that much. Aoba touches them, and agrees. Then, Yun anxiously asks if she can too, and once she gets her wish, she comments that she will allow it.

Seeing the two together, Hajime comments that they both look like children.

Aoba Suzukaze and Hajime practice exchanging cards, although they have no idea how to, Kou Yagami teaches them after.

While the three are there, Hajime spots people with different cards from the companies 'Tentendo' (Nintendo) and 'Macrosoft' (Microsoft). Later, they see the screen which included Hajime's animations, she is perplexed seeing it in person in that way. By the time they return, she is more than motivated to start working again.

Hajime and Hifumi Takimoto come early to buy copies of Fairies' Story 3, they meet the rest of the group after they are finished buying.

She had been taking pictures of one of the cosplayers and saying that she was involved in he project. Nene Sakura meets them all after, and it turns out she had gone to other stores to buy the collectibles for Hajime, who had done the same. The two became fast friends. The two end up discussing spoilers for the game, which lead to a dilemma for the whole group.

Hajime and Nene Sakura go to ask the voice actors of the game for their autographs.

When Kou Yagami and Aoba Suzukaze return, she wants Kou to give her her autograph too.

Shizuku Hazuki is willing to accept any proposal for a game as long as its good enough, Hajime suggests a military theme, but she also likes magical girls.

The employees at Eagle Jump are asked about themselves and their experience with the company, Hajime has a proposal for a game, Shizuku Hazuki had not expected someone to bring one. Unfortunately, it was rejected. She asks if she knew why it was rejected, and Hajime said she wanted to try a sentai idea, even though she was sure it would be rejected.

Hazuki then asks what the demographic is, and Hajime has not got a clear idea, so she has the idea to focus on one of them for next time. Hazuki says she will be open to any more proposals if she brings another.

Hajime teaches Yun Iijima skiing. In the evening, they go to the sauna together and the for a bath with Aoba Suzukaze and Hifumi Takimoto. 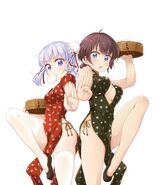 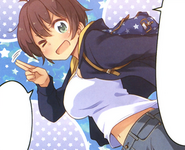 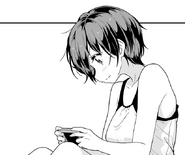