Nene Sakura (桜ねね, Sakura Nene) is the childhood friend of Aoba Suzukaze who took an interest in programming and she eventually became an intern at Eagle Jump after beta testing Fairies Story 3.

Nene has light-blonde hair that is usually in low pigtails tied by two light-blue marbles each, light-blue eyes and she looks like a middle school student that she is apparently treated like one at college.

Nene is described as childish, selfish and a klutz by Aoba Suzukaze who can't stay focused on the task given to her which is why she's often seen leaving her post. She is also an otaku and a fan of Faries Story Series.

In the spin-off, it states that Nene is desperately finding her purpose in life which is the reason why she attends college.

Nene is based in Tokyo and entered college after graduating high school for the sole purpose of finding her raison d'être. After she helped the beta-testing of Fairies Story 3, she found a passion for programming and eventually applied for an internship at Eagle Jump.

Nene is first seen in chapter 7 talking to Aoba via phone. Nene complains that everyone in her University thinks of her as a child and the two talk about Aoba's work.

Nene is seen again when she and Aoba decide to watch a movie. Nene calls to Aoba who's deep in thought while waiting for her. Aoba states that she's there for Nene which made the latter confuse.

Nene and Aoba got into a childish argument while buying tickets before buying foods. When the two get in line, Nene sees someone giving out glow stick and stated that she wants one but can't have because she's an adult. In the end, the two gets one each. Nene tells Aoba what is the purpose of the glow stick and the two become embarrassed thinking of them using it. Nene, then, tells Aoba that she's glad that the latter come and states that she can't invite her University friends because they'll treat her like a child even more. Aoba asks her if the movie they'll going to watch is good which Nene exclaimed 'of course'. Nene asks Aoba if the latter have a co-worker who likes anime and Aoba states she has.

Aoba runs out of popcorn and Nene tries giving her some which the former declines thinking that she'll gain weight. The two watches the movie and afterward tries to reenact the heroine's pose making a child laugh at them. The two buys souvenirs.

Nene finishes her exams and calls Aoba stating that it's her summer vacation and ask about the latter's and Aoba states that she doesn't have. The two talks about work and Nene thinks if Aoba will be alright.

Nene starts her part-time beta testing on Eagle Jump under Umiko Ahagon and is nearly fired because of being late. Nene becomes antsy trying to find Aoba making Umiko thinks of her as a spy which the former contradicts.

Nene tries to find Aoba but stops at Hajime's desk to admire all the displayed collection. When Nene heard Aoba, Umiko finds her and states that she's really indeed a corporate spy making the former calls out to Aoba for help.

Nene is introduced by Aoba to Umiko, Rin, and Kou as her best friend. Nene and Aoba state an apology to the three.

Nene starts beta testing and complains that she can't play the game because it always freezes and Aoba, who's fetching her for lunch, tells her to report it. Nene introduces herself to Hajime and Yun who are with Aoba. Yun asks if Nene is younger making the latter states that she's the same age as Aoba. Aoba teases Nene for looking like a child and Hajime thinks that its the two who look like a child not only Nene.

Nene finds a bug where Aoba's work 'Sophia-chan' will not die but the fight will be neverending. They report it to Rin. Nene and Aoba are advised by Rin before the latter is called by Umiko and Kou. Kou complains to Rin that her pudding is missing and Nene remember that she ate one a while ago. When Nene is left alone, she took the cup of pudding she ate and sees Kou's name in it. Nene sees a message from Rin about the pudding. She tries to give it back and accidentally hears a conversation between Aoba, Rin, and Kou. Nene starts thinking of the worse when Rin sees her. Rin asks Nene and the latter runs away after answering.

Next day, Nene eats lunch together with Aoba, Kou, and Rin. She listens to the three interacts about the beta version of the game and Kou's pudding. Rin states that the culprit apologies yesterday while looking at Nene and the latter shy-fully agrees. Aoba states that Nene might be the culprit cause she's not talking too much about making Nene exclaims in shock.

Days later, Nene sees Aoba, Yun and Hajime going to a convention and display her jealousy that she can't come. Aoba asks Nene what she's doing with a computer monitor on hand and Umiko who's behind Nene answers for the latter. Nene tries asking Umiko if she can come with the three, Umiko didn't approve and drags Nene away.

Nene and Aoba get into an argument about Aoba not sleeping well. Nene talks to Umiko about the argument and Umiko gives her advises. Afterward, Nene comes to Aoba's booth and finds the latter nowhere. Yun states that Aoba still hasn't come back from lunch. Nene sees Aoba's work and asks Yun who answers that Aoba works hard. Nene left without saying anything back to Yun. Nene falls down because of a chord and Aoba helps her up and the two reconcile. Nene comes back to Umiko and her booth. Nene answers Umiko when the latter asked if she and Aoba reconcile and accidentally unplugs Umiko's computer. Nene screams a sorry.

Nene calls to Umiko and the latter ask if she finds a game-breaking bug. Nene states she did, making Umiko slam her fist on her desk. Umiko asks Nene to buy energy drinks and snack and states that Nene needs to bring Aoba with her, making Nene asks Umiko to believe in her.

Nene and Aoba buy energy drinks and snacks and Aoba educates Nene about the proper receipts. The two settle on buying the expensive energy drinks for Umiko when Nene states that Umiko might complain if she is given a cheap item.

The two return and gives to Umiko what they've bought. Umiko complains to them about buying expensive stuff and using a legal receipt when in fact it's her treat. Umiko still tries the energy drink and states that its effective. Nene tries it and complains about the taste-making Aoba laugh at her. Aoba tries the energy drink too and begins coughing. Umiko states that Aoba is more childish than Nene.

Nene walks into Kou and Aoba talking and asks when will the latter leave and Kou answers for Aoba. Nene tells Aoba that they'll go home together. She says a good job and states that it'll be her last day as a beta tester. She asks Kou to continue looking out for Aoba making Kou wonders if Nene is Aoba's mother.

Nene states her gladness that everyone on Eagle Jump is nice and says that she'll work hard in college. Aoba says that they'll both work hard and gives a good job to Nene. Nene begins crying and Aoba tries to console her.

Nene walks in when the character design team together with Rin and Hajime are talking after buying their newly released game. She gives one of the souvenirs she bought to Hajime. They talk until Nene and Hajime accidentally spill a spoiler in the story. Aoba complains that the release day has been ruined because of what happened. Luckily the game is well-sold.

Nene attends the celebration party for the success of the Fairies Story 3. She and Hajime state that they'll ask for the autographs of the voice actors/actresses present on the party. Later, Nene encourages Aoba to get autographs which the latter declines while stating she already have someone who she wants to ask for an autograph. Nene asks who is it but Aoba states it is a secret. Nene wins in the lottery and gets a prize donated by Umiko. She honestly states that she doesn't want the airsoft gun as a prize and Umiko states that another gun will suit Nene better. Nene and Umiko talk about the gun and Nene state that she'll look up how it's produced before the next debugging, making Umiko states that they won't recruit anymore. Umiko gives her card to Nene and states that the latter gives her a call when Nene needed something making Nene cries. Nene is seen again with Umiko as they welcome Kou and Aoba back to the party.

Volume 2 ends with an omake. A very drunk Kou collides on a utility pole and says sorry to it. Aoba comes running to Kou. Seconds later, a very drunk Rin walks in and joke about traffic accidents and Kou's name. The two sits on the sidewalk when an officer starts talking to Aoba. Nene walks in with an airsoft gun asking everyone's doing before seeing the officer and hiding the gun immediately.

Aoba is Nene's Childhood friend since pre-school. The two care for each other and cherishes their friendship. Aoba often accompanies Nene to Otaku conventions.

Hajime is Nene's fast friend because of being an otaku. The two are in sync when talking about otaku stuffs.

Umiko is Nene's supervisor when she was beta-testing Fairies Story 3. The two have a comical relationship. Nene looks up to Umiko to the point that the former daydreams that Umiko is praising her on her progress in programming. Umiko became Nene's mentor when the latter shows interest in programming.

Hotaru was Nene's and Aoba's friend during highschool. They were in the same club along with Aoba.

They started off on good terms, but their relationship quickly turned sour and they became rivals. After learning Tsubame's background, Nene understood why she treats her coldly and helped debug her problematic codes. 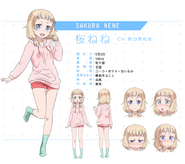 Nene and Mozuku on episode 8 eyecatch

Add a photo to this gallery
Retrieved from "https://new-game.fandom.com/wiki/Nene_Sakura?oldid=4632"
Community content is available under CC-BY-SA unless otherwise noted.