New Game! (ニューゲーム, Nyū Gēmu) is a Japanese four-panel manga series by Shotaro Tokuno, which began serialization in Houbunsha's seinen manga magazine Manga Time Kirara Carat from January 2013 and is licensed in English by Seven Seas Entertainment. An anime television series adaptation by Doga Kobo aired in Japan between July and September 2016, with a second season airing between July and September 2017. A video game developed by 5pb. was released in January 2017.

Having been inspired by the character designs of a particular video game when she was younger, Aoba Suzukaze, a high school graduate, begins working as a character designer for the game's developer, Eagle Jump. As she works on modelling and designing characters for games in development, she becomes acquainted with her fellow co-workers in the character design department, as well as those from across the company.

The original manga by Shōtarō Tokunō began serialization in Houbunsha's Manga Time Kirara Carat magazine from January 28, 2013. Houbunsha has published seven tankōbon volumes between February 27, 2014 and March 27, 2018. The fifth volume, subtitled The Spinoff!, takes place prior to the main series and features content not included in the magazine serialization. Seven Seas Entertainment licensed the series in North America. Three comic anthologies have been released as of August 26, 2017.

A 12-episode anime television series adaptation aired in Japan between July 4 and September 19, 2016 and was simulcast by Crunchyroll. The anime is produced by Doga Kobo, with Yoshiyuki Fujiwara as the director and Fumihiko Shimo as the series' script supervisor, featuring character designs by Ai Kikuchi. An original video animation (OVA) episode was made available for those who purchased all six Blu-ray/DVD volumes of the series, released between September 28, 2016 and February 24, 2017. The opening and ending themes respectively are "Sakura Skip" (SAKURAスキップ, Sakura Sukippu) and "Now Loading!!!!", both performed by Fourfolium (Yūki Takada, Megumi Yamaguchi, Ayumi Takeo, and Megumi Toda).

A second season titled New Game!! aired in Japan between July 11 and September 26, 2017 and was simulcast by Crunchyroll. The second season's opening theme is "Step by Step Up ↑↑↑↑" while the ending themes are "Jumpin' Jump Up!!!!" for the first six episodes and "Yumeiro Compass" (ユメイロコンパス, Dream-colored Compass) for episode seven onwards, all performed by Fourfolium. The series is licensed in North America by Funimation, who dubbed the first season and released a simuldub of the second season.

A visual novel developed by 5pb., titled New Game!: The Challenge Stage, was released for PlayStation 4 and PlayStation Vita in Japan on January 26, 2017. Characters from the series also appear alongside other Manga Time Kirara characters in the 2017 mobile role-playing game Kirara Fantasia. 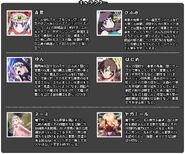 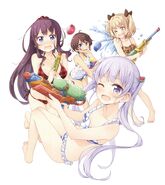 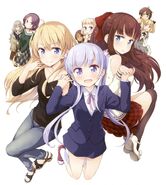 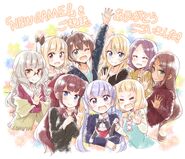